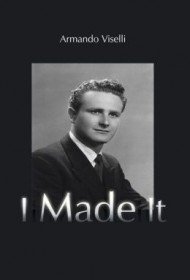 Italian-born Armando Viselli, the author of I Made It, immigrated to Canada in 1951 at age 24. An enterprising and entertaining character, he has contributed significantly to the artistic and cultural life of Windsor, the Ontario city where he settled.

His colorful, creative career would seem to provide the basis for a lively memoir, but much of that material has been squandered by relegating it to six “About the Author” pages at the end of his book. Here, readers catch a tantalizing glimpse of Viselli, now 86, as a novelist, playwright and poet, a man who once ran his own radio station, made short films and staged musical and theatrical productions. However, the author’s focus is elsewhere. He unaccountably spends more than 200 pages describing his first year in Canada working for the Canadian National Railway.

Those 12 months were not without interest: He and scores of countrymen had to adjust to huge differences between Italy and Canada, including the language, the climate and especially the food. “In my new country, the world of cuisine did not seem to be of any real importance,” writes Viselli. “We had a rich history of cuisine that was foreign to them.” However, he provides far too much detail from often ho-hum, day-to-day routines, bogging down the narrative and eventually crowding out potentially much more interesting events.

The pace picks up in the last third of the book, reaching a bizarre climax as Viselli stuffs the final 60 pages with a succession of random anecdotes about his short-lived jobs and embarrassingly detailed sexual conquests. In stark contrast, he devotes a single sentence to one of his more memorable achievements: bringing his parents and six other close family members to live in Canada.

Viselli seems to have a memorable story to tell. Unfortunately, he misses the mark with this curious memoir that is further undermined by countless spelling and grammatical mistakes.