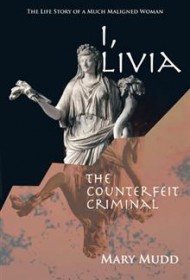 The title of Mary Mudd’s comprehensive study of Livia Drusilla, the favorite wife of Caesar Augustus, alludes to the title of Robert Graves’ renowned novel, I Claudius, which became a hit on public television and deepened the popular misconception of the evil, scheming woman who plotted against and had murdered all of her husband’s descendants who stood in the way of her son Tiberius’ ascension to power.

Mudd argues that Livia was nothing of the kind – indeed, that she was a benefactress of Rome and praiseworthy for her public works, charity and model behavior as a Roman matron and wife. The author dismisses Graves for uncritically relying on Tacitus and other classical authors who unfairly maligned Livia as part of an anti-Augustus campaign.

Mudd also investigates the circumstances of the deaths that Livia supposedly contrived and effectively demonstrates that she had neither the motive nor, in some cases, any real opportunity to eliminate her son’s rivals. Conspiracy tales make for exciting reading, especially with an evil woman in charge, but in this case, they disintegrate as soon as the historical evidence is carefully sifted in Mudd’s lucid prose.

Mudd usefully gathers many diverse sources to provide a compelling study that goes well beyond an ax-grinding defense of Livia. In chapters on Livia’s public and private life, her family history and her role as an icon of imperial power and in several informative appendices, the author assembles an authoritative work.

Some scholars might be disappointed that Mudd, wishing to keep her own interpretation as fresh and original as possible, eschews discussion of modern scholarship on the topic, preferring instead to base her work mainly on primary sources. But for most other readers, I, Livia should provide a fascinating and accessible work of biography and historiography.