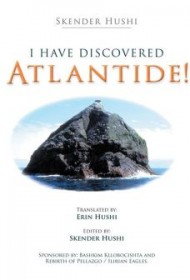 Going far beyond the established (though not undisputed) theory that the Albanian people are descended from ancient Illyrian tribes, author Skender Hushi claims a link between Albania and the island kingdom, which is generally—though not by Hushi—considered a mythical rather than historical place.

Apparently the Albanian-born (according to his Facebook page) author and his translator, Erin Hushi, are unaware that “Atlantis” is the English name rather than “Atlantide,” which the author uses throughout in reference to the island first mentioned in Plato’s dialogues as a mighty kingdom swallowed by the sea. The author takes Plato’s descriptions of Atlantis as literal. His other main source is “the scripts in the zmeraldi plates of Thoti … the last king of Atlantide,” who Hushi believes migrated to Egypt, bringing advanced civilization with him. Since no mention exists in the historical or contemporary record of such plates or of Thoti, many readers will be skeptical.

They might also wonder about Hushi’s contention that “Albanian language is the language of Atlantide and is the oldest language in the world.” Hushi can’t decide whether Atlantis ruled most of Europe before the flood in approximately 9500 BCE or if Thoti spread its culture all the way to Greece and Asia Minor afterwards, but it’s a leap from either scenario to his tortuous explications of the linguistic similarities between Albanian words and a grab bag of ancient and modern names, everything from Apollo and Napoleon to Mafia and Marseilles. “Tortuous,” regrettably, also describes Hushi’s awkward prose style, at least as rendered in English.

Albania has only rarely been able to exist as an independent nation, so it’s understandable that Hushi would wish to assert the value of his ancestral culture. But linking it in such a highly speculative fashion to a place that most people agree never existed doesn’t seem like the best way to do it, and readers are likely to be puzzled by this effort overall.