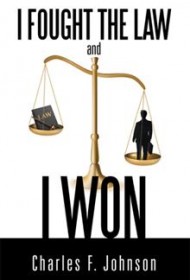 A disabled American veteran who experienced discrimination while working as a federal employee describes what happened and how he battled back in this thin yet informative book, written to help others fight back who are discriminated against.

Charles F. Johnson’s troubles began in early 1992 when Grace, a female supervisor, became angry at him for rejecting her sexual advances and said she “could make it very hard on me at work.” By the summer, he experienced her revenge. First, he was unexpectedly skipped over for a pay-advancing performance review. A short time later, she described him to the labor relations department as a “flaming queer.”

Johnson filed the first of seven Equal Employment Opportunity grievances against the U.S. government to rectify the situation. In all, it took him five years to win all his cases, with one suit rising to the U.S. Supreme Court. Although the effort led him to experience severe physical and mental health problems that he still grapples with today, he did end triumphant, scoring a six-figure compensation from the federal government.

The author writes in a direct manner and from his point of view only, which is often laced with invective (“both of them lied like rugs”; “I don’t know why all this administrative BULL even took place”). As he disperses the details of his case, he offers little personal information about himself beyond these elements (save for the brief biography at the back of the book). And while his spare writing is easy to follow, it could use an editor’s pen to fix word misuse and spelling errors (examples: “tentative” for “attentive”; “singed” for “signed.”)

Overall, the book lacks the artful narrative arc and tone that would lend it wider appeal. Still, it might be welcome among some readers seeking information and a kindred spirit in their fight against discrimination in the workplace.