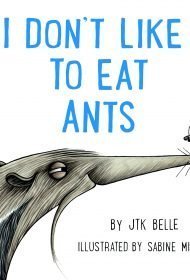 JTK Belle’s delightful fourth children’s picture book begins with a surprising comment: “‘I don’t like to eat ants,’/ said Anteater One./‘They don’t taste very good/ and they tickle my tongue.’” Thus ensues a lively discussion between two anteaters about their diet of insects.

Anteater Two is incredulous when Anteater One, with crossed arms, defiantly declares his ant-eating days are over. “’What’s wrong with you?’” he asks, pointing to an anthill. “’Eating ants is what we do!’” But Anteater One continues, lustily listing what he intends to eat: chocolate cake, a grilled-cheese sandwich, a salad of flowers and plants… and more. Anteater Two remains aghast: “Chocolate cake? For goodness sake!/ You’ll give yourself a tummy ache,” he says, later bolstering his argument for an all-ant diet with: “Why is it, then/ do you suppose,/ an anteater has such a/ very long nose?”

Finally, in an attempt to expand his friend’s fare, Anteater One offers to take Anteater Two to lunch. When they arrive at “Anteater Three’s Peanut Butter & Jelly Deli,” the waiter informs Anteater Two that they have run out of ants, and he’s forced to try something new—with humorous results.

Sabine Mielke’s illustrations are charming, with a lovely, soft, understated palette. She skillfully portrays the comical, furry gesticulating anteaters—each wearing a different colored shirt bearing their number, which makes for easier identification. At the bottom of many pages are one or two enthusiastic ants, reacting to the anteaters’ conversation. On the page where Anteater One declares he will eat no more ants, one ant exclaims “Good for you!” and the other says “Way to go!”