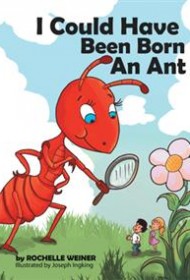 This charming picture book by Rochelle Weiner puts readers in the shoes of pine trees and parrots, goldfish and gorillas. Clearly written to help children flex their imaginative muscles while also practicing empathy, I Could Have Been Born an Ant is a whimsical guide to what life might be like as a horse (“I could run very fast either in a meadow or on a racetrack.”), a mouse (“People would try to catch me in a mousetrap with cheese.”) and a variety of other plants and animals.

Weiner’s language is simple enough for beginning readers, the perspectives she explores are childhood favorites and her details are crisp and memorable. Although the book’s ending feels abrupt, she does include a clever pivot away from the hypothetical, leaving readers with a few examples of all the things human children are able to do and the ways they can interact with the plants and animals described throughout the text. While the book is just 24 pages long, this twist brings the story full circle and helps turn it into an unexpectedly nuanced and satisfying read.

Unfortunately, this book could have benefitted from more thorough copyediting. Some commas are oddly placed, and sentences often waffle between factual and hypothetical statements. In the title situation, for example, Weiner writes, “I could have been born an ant … I am so tiny, that people could step on me by accident.” Since the book is intended for a young audience, such shifts might be confusing.

Ultimately, though, I Could Have Been Born an Ant remains a delightful picture book that will encourage children to use their imaginations even after the story has been read and the cover closed.