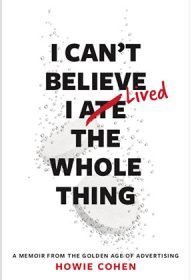 There was a time when ad exec Howie Cohen’s words were spoken in almost every home and office across America. His fascinating, humorous memoir is sure to bring back memories for many as he recounts a remarkable career in advertising.

Cohen is probably best known as the advertising executive—advertising genius, really—who created two of the most ubiquitous catch phrases ever, both for Alka Seltzer: “Try it, you’ll like it” and “I can’t believe I ate the whole thing.” Back in the early ’70s, there was no social media, so it was the 30-second TV spots and subsequent word of mouth that made the two tag lines an inescapable part of the American lexicon.

Those commercials helped propel Cohen to the top of the ad world. Starting at the New York agency Doyle Dane Bernbach in 1965, he had a 52-year career, including two stints at the influential Wells, Rich, Greene, where he did some of his most famous work. His memoir takes readers through the ups (award-winning ads, financial windfalls, the launching of his own agency) and downs (campaigns that never quite caught on, backstabbing co-workers, the failure of that agency).

Cohen’s narrative flows briskly, with compelling writing throughout. His stories are interesting and mostly fun, rather than serious; his recounting of reviving the fortunes of Jack in the Box by blowing up Jack, the company’s mascot, in a 1980 campaign is wonderful. Like his commercials, he knows how to grab a reader’s attention and entertain. He also recounts, with interesting detail, his personal life: his longstanding marriage to Carol, who (“dragged me kicking and screaming to my own happiness”), raising a family, overcoming a drug problem and beating cancer.

The ad world has changed radically since Cohen started out. The author’s stories about the old days—when Madison Avenue unleashed a never-before-seen brand of advertising, propelled by humor and an arched eyebrow—are well worth reading.