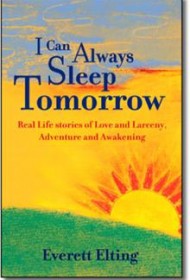 This slim collection — a memoir, though the author notes that some names have been changed and the ending of one story is fictionalized — details the author’s travels around the world, both as a father and working executive, and later, in retirement. The nine stories are well told, well written and professionally edited, making for an enjoyable read – often humorous, sometimes bittersweet, with a couple of page turners thrown in for good measure.

In “Separate Rooms,” the unhappily married author, Everett Elting, travels on business to Japan with a cheerful young woman engaged for eight years to a “brilliant oncologist.” Loyalty is everything, she tells Elting, who grows increasingly smitten with the young woman. Soon, they are eating breakfast together, wrapped in hotel robes, and kissing — albeit chastely — goodnight. By the end, they’ve forged a close friendship. But as they part at the airport with their respective partners, Elting decides to recommit to his wife, only to find days later a message from his new friend that earlier might have changed everything.

“Soul Mates” is the darkest of the stories, with the newly divorced Elting finding himself in the middle of a con-artist scheme at the hands of a woman who ultimately threatens to ruin him. There’s an encounter with James Cagney and a weekend romance with a girl whose name he never learns and who vanishes never to be heard from again — except in Elting’s imagined ending. And in the final tale, “The Star Spangled Serengetti,” Elting meets with a Maasai elder in an encounter that illustrates how small a world it is and how much alike we all truly are.

These stories attract not because they are grand, out-of-the-ordinary dramas, but rather tales from an ordinary life, lived by a man fully engaged in the moment. This is a book for readers who like to learn about the world at large, and the people who venture out to experience it.