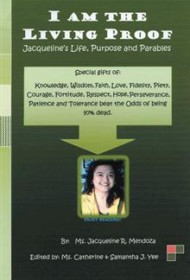 Jacqueline R. Mendoza was living a simple, unassuming life. Born in 1979, she and her family emigrated from the Philippines to California in 1993. Like millions of other young women, she attended high school, hung out with friends, laughed, dated her boyfriend and eventually went to college.

Then, in October 1999, a car accident killed her friend and left Jacqueline in a coma. Doctors gave her a 3 percent chance to survive. Yet Jacqueline beat the odds, maintaining her ability to read and write despite permanent brain damage. I Am the Living Proof is testament to her recovery and the Catholic faith that carried her through her darkest nights.

In the first part of the book, Jacqueline relates a number of harrowing moments, including finding out that her friend had died; her painful physical therapy; her four suicide attempts; and her feelings of inferiority from her disabilities and weight gain. The next part is a handbook of Catholic apologetics that includes a number of the author’s own prayers, poems and parables expressing her devotion to Jesus Christ and the “one holy and apostolic Church.” Along the way, she provides opinionated commentary on such social and moral concerns as the death penalty, extramarital sex, and venereal disease.

Jacqueline is devout and her story is highly inspirational, but the book suffers from a major problem, one the author acknowledges early in the book. Because English is her second language and she has a brain disorder, there are many grammatical problems. This makes her prose often difficult to read and understand. Moreover, while Mendoza receives high grades for effort and tenacity, the book is overly long (540 pages) and the second part could have been eliminated in favor of a more in-depth telling of her personal story of triumph.

Still, I Am the Living Proof has a good heart, and those readers who do gravitate to it will be moved by Mendoza’s genuine spirit.