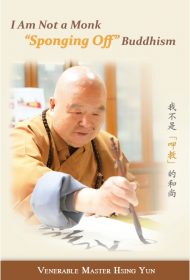 During 84 years of monastic life, Venerable Master Hsing Yun has filled 365 volumes about the Buddha. Yet as he nears age 100, disciples requested one more volume that distills their message. I Am Not a Monk “Sponging Off” Buddhism is that book, a dense but rewarding collection of 10 previously published essays that explain Buddhist tenets in the context of Hsing Yin’s path to international fame.

Born into poverty in 1926 in China’s Northern Jiangsu Province, the author was 11 when Japan invaded his country, burned his family home and left dead bodies littering the countryside. He joined  a monastic order the following year and spent a decade studying the Dharma before leaving for Taiwan in his early 20s.

There, he started resuscitating a Buddhism not well understood by the writing articles, editing Buddhist periodicals and taking the Buddha’s lessons beyond cloistered monks and into the lives of regular people. As his followers grew, he built a temple on barren land near Kaohsiung City, adding on as he could. It now stands as the shimmering Fo Guang Shan “Buddhaland,” which fuels an international network of schools, temples, children’s and seniors’ homes, retreat centers and publishers. His disciples, on all five continents, are several million strong.

Despite the poverty, starvation, deprivation, abuse, loneliness and pain he has encountered in this life, the author writes, it “has been strangely wonderful.” Those ordeals helped him develop strength of character, generosity of spirit, loving-kindness and zeal to spread the Buddha’s teachings

Like all good Buddhist stories, this one requires previous knowledge about the teachings before it starts to make sense. For example, the title represents Venerable Master’s belief that a monk’s job is serving others, not living in an ivory tower, supported by begging and doling out sacraments (“sponging off Buddhism”). Appreciating all the nuanced lessons may require extensive rereading.

While this might be too challenging for casual readers, however, Buddhist scholars will find it an invaluable look at one master’s incredible lifetime of accomplishments.