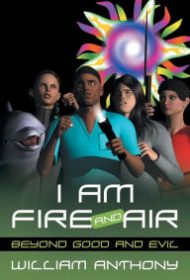 This first installment of a (presumably) young adult science fiction series delivers an intriguing premise: The story begins in some kind of top-secret facility in Malibu, California, and revolves around four teenagers who live there as subjects for some unknown scientific research.

The teens are all individuals who have fallen between the cracks of society and have become essentially invisible. Javon is an orphan who comes from the mean streets of South Central Los Angeles. NX, another orphan, is a 15-year old genius hacker from Japan. Thirteen-year old Ana comes from a remote village in the Upper Amazon Basin. Elina is from Greece.

Brought together by a Department of Defense contractor, their lives in the facility, although strange, are nearly idyllic. But then—on Javon’s 16th birthday—the facility is attacked. All of the scientists in the building are killed by some kind of poison gas; only the four teens survive. But in a largely underground facility filled with cutting edge military weapons—such as a sentient, spider-like drone—can the group survive long enough to understand their role in all of this?

While the four teens are adequately described early on (albeit superficially), there is little to no character development from that point on, making the protagonists seem more cardboard than real. It is hard to be emotionally connected to two-dimensional characters, and this greatly reduces the story’s power and overall effectiveness.

That said, the pacing is effective and the use of high stakes (the facility’s potential to be a dirty bomb) increases the tension dramatically. Readers will surely have mixed feelings about the conclusion. Yes, it’s climactic and, yes, the plot twist will have readers wanting to read the next novel, but is it a satisfying ending or simply a respite until the sequel?

While not a perfectly crafted novel, the nonstop action and pedal-to-the-metal pacing make this a book that should keep young adult readers turning pages until the end.