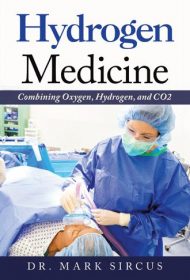 In this alternative medicine book, Dr. Mark Sircus, a Brazilian acupuncturist and honorary doctor of oriental and pastoral medicine, discusses hydrogen therapy and how it can treat disease and enhance health.

Sircus posits that hydrogen gas’s anti-inflammatory effects may provide antioxidant intervention for a range of conditions, including COVID-19 infection, cardiovascular disease, psychiatric disorders, neurodegenerative disorders, sleep apnea, diabetes, cancer and aging in general. It may also be useful, he writes, during surgery and to neutralize adverse effects of chemotherapy and radiation therapy.

While exploring the benefits of a therapeutic combination of hydrogen, oxygen and carbon dioxide, the author frequently excoriates the medical establishment and media for failing to understand its value. He quotes several experts (often minus their professional credentials) and provides anecdotes of individuals who claim to have successfully used hydrogen inhaler machines or hydrogen-infused water. Both therapies are available for purchase on his website.

Sircus often focuses on the dangers of vaccines. An extensive reference section lists many of the studies he cites, but his summaries often skew their findings. For example, he reports the New York Times wrote in 2009 that “as soon as flu vaccinations start next month, some people getting them will drop dead of heart attacks or strokes….” The full article goes on to say, however: “But those events will not necessarily have anything to do with the vaccine.”

Sircus makes valid points about environmental toxicity, providing healing suggestions that are simple and readily available, such as using magnesium. However, nonscientists may struggle to understand terms he frequently uses, such as “hydroxyl radical” and “peroxynitrite scavenger.”

Those who distrust the media and medical establishment will likely appreciate the alternative medical information offered here. Others will want to carefully weigh the author’s statements.