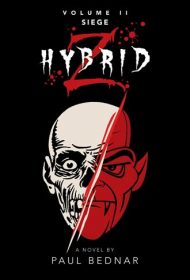 The story begins where Hybrid Z: Origins ended. Boris Dalca, an “elder vampire,” seeks to break into the “Necro” facility, where scientists study the Necro virus and the zombies it creates. The virus’ genesis and impact drove Origins’ plot.

Boris intends to steal the virus to achieve world domination and, thus, he forces another vampire, Edward (the protagonist of both works), to aide him. Although Edward manages to prevent Boris from stealing the virus—while unfortunately suffering exposure to it—Boris escapes with the original zombie, “Zboy.” Now Edward must work with the Ghost Team (who annihilated the original zombie infestation in Origins) to keep Boris from using Zboy to unleash a zombie plague.

Bednar displays a flair for character development. After Edward is exposed to the virus, he essentially becomes a “hybrid” creature (half vampire, half zombie), who has now “died” twice. His characterization is both inventive and believable. And while the introduction of a vampire-hunting league distracted from Origins’ plot, Bednar successfully interweaves it into the narrative of Siege.

Some descriptions suffer from imaginative failure, however. For example, Bednar uses stale tropes when describing Boris’ “gothic” lair: “The eighteenth century stone building was impressive. The multi-gabled roof towered several stories high, with wrought iron decorations…The opposite side of the building was a rounded tower overlooking a steep cliff and the valley below.” The creatures that inhabit it are equally familiar, including a gangly servant named Fritz and another with a hump, who lisps.

Additionally, action sequences power the plot, but the story stalls when exploring somewhat tangential plotlines, such as the growing inability of vampires to reproduce. Winnowing such subplots would improve the pace.

Siege is somewhat weaker than the previous series entry. Nonetheless, the work should appeal to genre fans, especially those who enjoyed Bednar’s first installment.