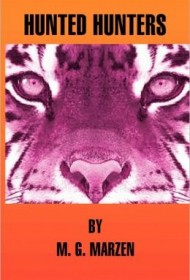 The book-equivalent of a low-budget action movie, Hunted Hunters provides nonstop excitement while eschewing much depth or nuance.

M.G. Marzen’s story follows the good guys—photographer Mick Swift and his girlfriend, investigative reporter Marie Sweet—as they track down a story about a phony animal rescue shelter that appears to be a front for a big-game trophy hunters’ killing grounds. But that’s not all that’s going on behind the heavily guarded gates of the supposed sanctuary. Soon, Mick and Marie find themselves on the much more nefarious trail of a band of sociopathic narcissists high on their own power. The “Great White Hunters” behind the fake shelter haven’t stopped with killing animals. They’re also creating powerful, mind-manipulating drugs, and will let nothing—human or animal—stand in their way. These bad guys are bad guys through and through.

The lightly sketched characters and loosely connected plot points in Marzen’s sophomore effort play second fiddle to the main event: action, action, and more action. Readers looking for lyrical turns of phrase won’t make it too far into Marzen’s testosterone-fueled world. But if you’re in it more for the hang gliders, helicopters and Humvees, hang on for the ride.

Marzen weaves some deeper themes into his story, with frequent speeches by Mick on Constitutional rights, but these feel more like asides than integral parts of the story. Distracting, too, are the grammar, word choice, and punctuation problems scattered throughout the text. Homonyms present a particular problem, creating unclear meaning and leaving the reader to puzzle out whether Marzen meant “accept” when he wrote “except.”

Go into Hunted Hunters expecting highbrow literature, and you’ll be disappointed. Approach it like a Grade B movie, where good and evil clash and you never doubt that good will win, and you may find some entertainment value.