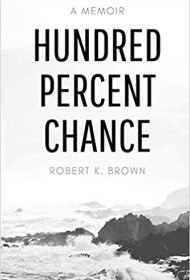 In 1990, 20-year old Robert Brown, a college student from the academically elite Carleton College, was studying in England when he was diagnosed with leukemia. His memoir, Hundred Percent Chance, recounts his year-long journey to remission and recovery.

Spontaneous bruising, bloody oral sores, and profound fatigue were Brown’s first symptoms. By the time he presented himself at the college infirmary, he was critically ill and quickly diagnosed with a rare and aggressive form of leukemia. The plans for his return to the U.S. were a logistical feat; he required constant medical care en route.

In addition to normal chemotherapy side effects, including weakness, vomiting, and hair loss, Brown endured severe fevers, often spiking at 105 degrees, due to a brain abscess that required surgery. While he actively avoided learning the details of his treatment, he eventually asked the bottom-line question: his odds of survival. “The numbers”, his doctor told him, “are irrelevant. Either you survive, or you don’t. You are alive today! That means at this moment your personal chances of survival are 100%!”

Brown’s straightforward, unpretentious writing style is compelling and brutally honest. The use of present tense, first person, amplifies the effect. His wry sense of humor is both endearing and heartbreaking. After learning he was in remission, Brown quips, “It’s great to be in remission.  Great with a capital ‘G’ and a Tony the Tiger drawl.” Neither victim nor hero, the author survived with humor, grit, and the support of medical care-givers, family and friends.

Regardless of one’s personal experience with cancer or critical illness, these pages relate an essential human experience:  the struggle to survive against the odds. This universal theme will resonate with almost any reader.