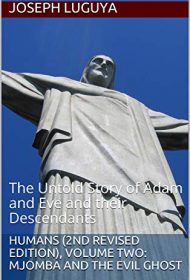 Joseph M. Luguya’s Humans: The Untold Story of Adam and Their Descendants spins an ambitious three-volume fictional tale, in which he charts the history of the human condition. Mjomba and The Evil Ghost is the middle book, but can easily be read without dependence on the other volumes.

Luguya employs a device made most famous in C.S. Lewis’s novel The Screwtape Letters, in which a protagonist enlists Satan himself to tell the story. In this novel, readers learn first-hand from Satan how humans have historically succumbed to temptation. Satan makes sure to present himself here not as villain but victim, and merely one who whispers suggestions to humans who then make unfortunate decisions.

The protagonist Mjomba, a seminarian native to Tanzania, is the scribe for this outpouring of information, and readers can easily imagine him scrawling furiously as Satan spouts forth. For instance, the first anecdote is that of the titular Adam and Eve. According to the devil, he didn’t instruct them to eat the proverbial fruit, but merely to think; they then concluded they didn’t need the “Prime Mover” to make choices for them. The next instance was not far behind, when their son Cain listened to whispers and yielded to jealousy.

No pride-based offense is omitted, from that original fall through present-day power grabs by nations who justify their actions by claiming that they are for the greater good. Satan warns Mjomba that those who do not heed “The Deliverer’s” warning to repent are doomed to join the fallen angels in the fiery pit, but, gleefully explains that he would take delight in that.

At nearly 800 pages, the book is a dense, challenging read. Readers must first digest the sum of Christian history, the Bible, all the major players (ex., St. Peter, Mother Teresa), and spiritual concepts (free will, sin, etc.) before being introduced to Satan and his apologetics. In addition, the author often loops back to some themes; for example, he repeats the Cain/Abel story several times.

The author’s own biblical study background is on full display, and he can accurately quote not only Scripture but also his scope of theology in general. He has a definite bias toward Christianity, and the Catholic Church in general, and non-Catholic readers may find his opinionated presentation a bit preachy.

Those new to the Christian, specifically Catholic, viewpoint may find this book intriguing, as well those who are already familiar with the topic and enjoy speculative interpretations of well-established theories. Those seeking a less opinionated work of historical fiction may want to look elsewhere.