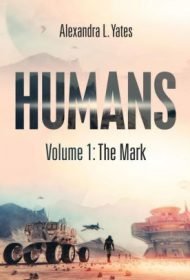 Alexandra L. Yates’ novel, the first in a series, depicts the aftermath of a devastating conflict in the near future that destroyed much of the Earth’s population.

Eight children have been isolated and trained for years to become leaders of the Red World and its capital, Kantas City, one of the few remaining outposts of humanity after the “Ecological Wars” of 2025 wiped out 99.9% of Earth’s people. The four boys and four girls have in common a mark (never described) on their left shoulder blades. In addition, each has a unique talent: one reads minds; another communicates with animals; another sees auras that identify people’s intentions, and so on.

Early in the story, the eight “Elites” turn 18 years old and are sent out to see what (and who) has survived the nuclear holocaust and to prove they are ready to take over the Red World and its 100,000 citizens. Surprisingly, although humanity has been decimated, the government and citizens seem to have little respect for human life. The teenagers have been indoctrinated to believe that any possible threat should be eliminated without thought or guilt.  As a result, violence permeates much of the novel.

With four male and four females in close proximity, one would expect romance and sexuality. These elements are hinted at, but anything more may come in a later volume.

Super teens (Power Rangers, Teen Titans, et al.) and the aftermath of nuclear devastation are not unique.  However, there’s something appealing in Yates’ version. The characters not only display unique powers, but each has a distinctive personality along with problems reconciling his or her role in the government and the future.

Readers may feel confused by the mix of present and past tense.  Perhaps this can be explained by the author’s statement that the book was originally written in French.

Despite any shortcomings The Mark is intriguing enough to make science fiction fans look forward to Volume 2.