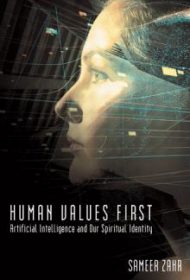 Howard, a retired factory owner, is plagued by guilt after the suicide of a former employee is linked to the increased automation and consequent layoffs under Howard’s watch. Now, in an act between penance and obsession, he sets out to bring experts in AI, ethics, and religion together with the mission of preserving human virtue in the face of technological threats.

The formation of an academic think tank is not an obvious subject for a novel, and Human Values First demonstrates why that might be. Although Howard’s guilt is a compelling catalyst for his actions, there’s simply not much to dramatize in the dry recounting of academic meetings, and any possible tension resulting from them is instantly dissipated when it turns out Howard’s “experts” wind up simply agreeing with one another most of the time. In fact, typical passages consist of expansive speeches concerning AI, followed by other characters simply thanking the lecturer for his/her contribution. The speeches’ content is invariably information that the other experts should already be aware of, so their only purpose seems to be to inform readers (at the expense of any resemblance to natural dialogue).

Overall, one might wonder whether the ideas behind Human Values First are best served in a novel at all. The dialogue is stilted and unrealistic, and the characters are insufficiently detailed or nuanced to be truly compelling. So although the author seems to be widely read on the subject matter (notwithstanding several misspellings of the names of relevant authors like Stephen Hawking and Ray Kurzweil), it seems like his concerns would stand a greater chance of resonating with a reader in a work of nonfiction.

Unfortunately, in its present form, Human Values First offers too little in terms of character and story to command the reader’s attention.