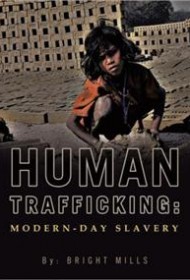 There’s no shortage of news stories or books detailing the scourge of human trafficking. Bright Mills adds his voice with Human Trafficking: Modern-Day Slavery, a large-size book with photographs that accompany the text.

After a brief introduction that describes the problem, Mills devotes two-dozen pages to victims’ stories, a nation-by-nation rundown of the types of trafficking that occurs. The author credits these to Kathleen Fitzgibbons, “a senior officer in the (U.S. State Department’s) Office to Monitor and Combat Trafficking in Persons.” We learn about Maira, a 15-year-old Honduran who was brought to the U.S. after being promised a job in a textile factory; instead, she was raped and forced to work as a prostitute. And Samuel, a 9-year-old in Eastern Sierra Leone who was kidnapped by rebels and turned into a child soldier.

Their stories, and the others, are all-too-familiar to anyone with even a passing acquaintance with human trafficking and, sadly, do not shock – though the number of countries named (nearly four dozen) does hammer home the breadth of the problem.

Mills follows this with details about the Economic Community of West African States’ plan to combat human trafficking, including a numbered list of the group’s goals and recommendations. There’s no context for the information; these are simply position papers or government handouts and would have been more appropriate for an appendix. The remainder of the book is devoted to often-grainy photographs, along with captions and stand-alone quotes about human trafficking.

Mills’ words are direct and simple. Much of the book, though, appears to be a summary of various government documents that often slips into difficult bureaucratese. With only 65 pages, a good portion devoted to this type of unengaging prose, Human Trafficking gives readers a superficial look at the topic, at best. More research and pruning of ineffective material could have made this a much more interesting book, one offering a deeper look at a worldwide tragedy.