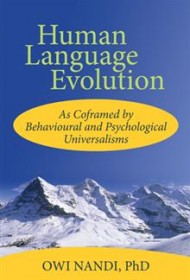 In this book, Dr. Owi Nandi explores the idea that the formation and evolution of words in multiple languages originates from universal emotions and physical feelings.

The author, whose area of specialization is plant biology and plant systematics, seeks to explain the correlations between sounds reoccurring in human languages and emotional-cognitive responses. He posits that people experiencing certain emotions or physical feelings (pain, for example) display similar facial expressions, and those facial expressions lead to the emission of certain sounds — thus creating words that share sounds and meaning across many languages.

Most of the book is devoted to associating concepts, such as “hurting,” “scratching,” “father,” with the first consonant of their roots across 34 language families and single languages, both modern and proto-languages. The approach remotely resembles Greenberg’s mass comparison method, although Greenberg offers a more sophisticated method of determining word origins, rather than solely utilizing a word’s initial consonant.

Dr. Nandi, a remarkable polyglot, presents his linguistic background and the sources and premises he relies on, outlines the methods of his research, and describes the language phyla he studied and the principles of delimiting the semantic fields. The scope of the data presented here is impressively broad. For amateur language lovers, this book will serve as an inspiring source for further inquiry.

For linguists, however, it will seem a little naïve: tracing word origins by a single initial consonant has been proven to be an unreliable and inconclusive method of discernment. In addition, Nandi is not always terminologically accurate. For example, he refers to “b” and “p” as consonants, while categorizing “s” as a sibilant, when all three are actually consonants. Numerous typos take away from the academic impression the book aims to produce.

Even so, this book sheds light on the intriguing issue of human language origins and the existence of universal prerequisites for naming objects. It may spark an interest in lay readers hoping to learn more.