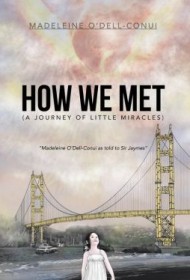 How We Met is Madeleine O’Dell-Conui’s memoir of a full life.

Born in the Philippines in 1941, she married and immigrated to the United States in the 1960s. She came to the States to pursue a nursing career and eventually received a master’s degree in public administration. She raised four children – much of the time as a single parent after her divorce – and is now retired.

O’Dell-Conui’s writing conveys her love of family and her commitment to her children and friends. But unlike most memoirs, there isn’t enough of herself in her book. She tells her story in too-brief fashion; it takes up only about a third of How We Met. The rest of the book is a combination of chapters on her children and their families, photos (family and otherwise), a history of the O’Dell family and reprinted material regarding the religious site at Medjugorje in Herzegovina.

How We Met would have benefitted from closer editing. The author often switches between present and past tenses. Writing about her future husband, for example, she says: “He plays with his buddies through the weekends and through the holidays. . . I was miserable, frustrated, and lonely.” Other passages are convoluted and difficult to follow: “When I came to visit the Abays, the good doctor told me that I should be careful with Jules. He thinks he is married somewhere and still thinks I should marry his son whom I missed meeting the summer he came home because I also went home to my parents in the province for a vacation.”

In sum, while family members may enjoy How We Met, its thin narrative and writing challenges make it difficult to recommend to general readers.