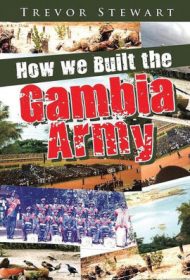 Trevor Stewart left home at 15 to join the British army. He retired as a major some 39 years later. In this memoir, he recounts one of the highlights of his career: building an army from scratch.

How he got the assignment is a story itself. In 1985, the author was asked to assemble a modern pentathlon team for a British Army of the Rhine competition in Germany. After his squad placed first among 29 teams, a much-impressed general decided Stewart was just the man to oversee a daunting project in the West African nation of Gambia.

One of the last fragments of the British Empire, Gambia had become independent two decades before. As the Brits phased out their presence, officials decided a 1,500-man army was needed to protect citizens and keep peace. Stewart was tasked with making it happen.

He was given a small team, minimal equipment and even less financial support. With his ingenuity, hustle and deal-making skills, he found surplus construction supplies to help build facilities, refurbished outdated military equipment from the Falklands War, convinced those involved in diplomatic missions from other nations to contribute engineering skills and materials. He even found two crates of old bicycle parts that he turned into 18 like-new bikes.

The result, three years later, was a cohesive, disciplined and professional Gambian military. Just as important, perhaps, were his non-military contributions: providing medical care, hosting events that boosted the local economy, and bringing drinking water to three-quarters of Gambia’s villages.

Stewart’s story is interesting, concise and well-told, with just enough humor. “It is amazing how many memories come bouncing back when you put your mind to it—most of which are quite printable,” he writes. While a book detailing a three-year geopolitical project could easily slip into military jargon and government-speak, the author dodges that pitfall nicely.

Few people are likely familiar with Gambia and events there. Stewart provides an enlightening—and enjoyable—read in these pages.