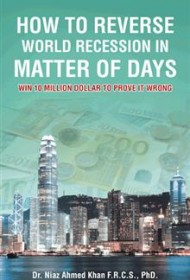 Though its gramatically incorrect title might be off-putting to many, Dr. Niaz Ahmed Khan puts forth some bold and provocative, if idealistic, ideas in How to Reverse World Recession in Matter of Days.

The driver of Khan’s theory on how to stimulate economies is his creation, the Mutual Benefit Bond System (it’s not explained why the acronym is MBCS, rather than the expected MBBS). MBCS is designed to raise money for government operations, not through taxation, but by the sales of bonds. Those bonds, offered at a discount to the public, could then be redeemed for goods and services. “In MBCS, there is no statutory obligation to buy bonds,” Khan writes. “The scheme relies entirely on the basic human instinct of getting the best deal for the money.”

Khan claims that this system would be attractive to the public, because they would pay a higher price for goods and services without buying bonds than they would by purchasing bonds and using them to pay.

Khan’s idea, which he claims would allow interest-free banking and a reduction of unemployment, is intriguing. But as he notes, “MBCS requires the wholehearted endorsement of the Government of USA […]”; in the current political environment, it’s difficult to believe that such a drastically new system could gain the necessary support. Also, while Kahn’s system seems fundamentally workable, it relies on optimistic predictions that assume perfect and rational behavior from consumers.

Khan is an ophthalmologist with Ph.Ds in business administration (Ashwood University), tax management (Rochbille University), and economics (Hill University). Because these diplomas are bestowed by lesser-known institutions, it’s difficult to discern if his theories have been held up to rigorous analysis. In any case, his book would be improved with the help of a knowledgeable editor who could eliminate errors such as “barrowed money” instead of “borrowed.”

Ultimately, his plan seems overly optimistic to be practical in today’s world. Nonetheless, it’s a noble effort to seek economic improvement for the U.S. and the world.