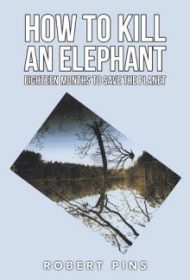 Robert Pins’s How to Kill an Elephant is a lengthy series of unorthodox essays aimed at changing our way of thinking about current issues. In questioning the authority of what he facetiously calls “Great Brains” (various leaders: political, social, corporate, etc.), he focuses on topics as diverse as the UK’s National Health Service (NHS), taxes, overpopulation and climate change.

Elephants, for the author, represent good-intentioned but fatally flawed solutions to our social problems. But while Pins is clear about what he regards as our “elephants,”—speed limits, taxation of the upper class, environmental/wildlife charities, and many more—he purposely never offers alternative solutions, noting that he’s interested in changing the way people think, rather than any particular viewpoint.

The author’s topics are somewhat disorganized and redundant—evidently to drill home his point. Instead, the repetition becomes frustrating. For example, early on, we know that Pins dislikes the NHS, believing that smokers and the obese disproportionately and unfairly benefit from it at the expense of all taxpayers; so there seems little value in constantly rehashing that material. Additionally, he tends to digress, with chapters that might meander from declining bee populations to unethical practices in the food and drug industries, corruption in charities, and so on, with only the most tenuous connections between them.

Additionally, Pins’s assertions are often illogical or unsupported: At one point, he outlines how “natural” climate change propelled human evolution and seems to believe man-made climate change might do the same, without addressing the science that says human-driven climate change is occurring far too quickly for any evolutionary response. In another passage, he asserts that Bill Gates’s philanthropy does environmental damage, without empirical support.

Pins is a skilled writer who addresses hard topics with irreverent humor, but readers are unlikely to emerge from How to Kill an Elephant with any true revelations. In the absence of any substantive analysis or policy prescriptions, the book ultimately reads like a long, personal complaint.