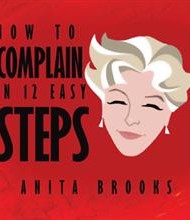 Often, simplicity makes a much greater impact than complexity. Such is the case with this delightfully short book, How to Complain in 12 Easy Steps. Yes, it has just 13 pages and less than 120 words. Yet it offers 12 nice points for being taken seriously and getting results when delivering a complaint.

Author Anita Brooks is a teacher of violin, viola, cello and double bass at eight schools in Toronto. The mother of two says she was inspired to write this book after being told by her psychiatrist that she didn’t complain enough. Unfortunately, she doesn’t elaborate on this problem, which might have helped justify the need for her book.

Still, the book’s format is clever. Each step is listed on an individual page in what looks like hand-written script on a yellow sticky note taped to a colorful background. Some of the brief, but important points made suggest that you “don’t smile,” don’t wear bright clothes,” “avoid dramatic physical gestures,” and “use direct eye contact.” In addition, one nugget of advice even is reinforced with a nice paraphrased T.S. Eliot quote from the Four Quartets.

While so short that the 12 steps easily can be read in about a minute, this advice is best read as a kind of mantra, over and over again, so as to absorb the elements in a way in which they can become deeply ingrained. While the steps are invaluable, they are marred by two small word usage errors. Brooks says to talk “slow” rather than “slowly”, and says to “breath” instead of “breathe.” Also the last step, “Complain yoga is life,” is a bit baffling.

Overall, this is a book with strong appeal for anyone who feels inept at complaining effectively. It would be a nice gift book as well for a friend or relative in need of such help.