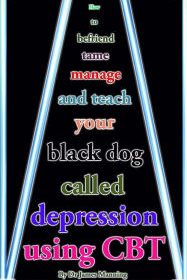 As a young man, James Manning sought therapy to ease the burden of his chronic depression. He went on to become a clinical psychologist and write a dozen books on depression, cognitive behavior therapy, panic and obsessive compulsive disorder. His latest, How to Befriend, Tame, Manage and Teach Your Black Dog Called Depression Using CBT, is designed to help readers understand, even embrace, the “black dog”—Winston Churchill often used this term when referring to the gloomy periods of his bipolar disorder—and manage it through mindful training.

In recounting his own struggles, Manning shares just enough, but not too much, of a personal story that, if allowed to run unleashed, could have overpowered the book. He offers readers helpful tools to deal with their depression, including a mood diary, therapy preparation sheet, and an interesting exercise with one’s future self, and solid analogies of complex brain processes. In one chapter, for example, the author sheds light on selective serotonin reuptake inhibitors, found in many antidepressant medications, through the analogy of a basketball team with only one or two overworked players: “SSRIs are a bit like the coach bringing on more squad members to help.”

Each chapter concludes with “Advice from the Black Dog,” a short snippet beneath an illustration of a gentle canine. Now 49, Manning still uses many of the strategies to keep his own black dog at bay.

Manning doesn’t define CBT (Cognitive Behavior Therapy) until late in the book. While odd given its prominence in the title, this isn’t a stumbling block because he writes clearly about the topic, avoiding “doctor speak.” His work is friendly and professional, with short, pithy chapters occasionally punctuated with humorous cartoons that make it hard to resist turning the page for just one more.

Ultimately, How to Befriend… is a helpful guide not only for those who struggle with depression, but for readers who simply want to learn how to curb their own negative thinking.