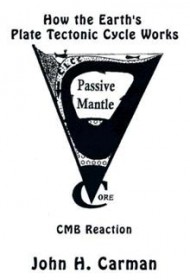 This professional/technical book, How the Earth’s Plate Tectonic Cycle Works, by John Carman, takes a fresh look at the unifying theory of geology: plate tectonics. While a cyclic tectonic system is universally accepted, Carman goes beyond simple interactions of the earth’s mantle and crust, but adds intriguing arguments for the involvement of the earth’s core in the tectonic cycle.

The author’s writing style is extremely difficult to follow. Spelling errors abound, a very unusual citation system is used, acronyms are not explained, and complex and run-on sentences could benefit extensively from quality editing. Even for those well versed in the subject matter, reading the text will be a challenge due to the convoluted sentence structures. Figures in the text are poorly reproduced and occasionally show remnant moire patterns (background pixelation) from improper scanning algorithms. On a final note, the manuscript in a rewritten and edited form might be better suited for publication in a respected peer reviewed scientific monograph rather than a stand-alone self-publication.