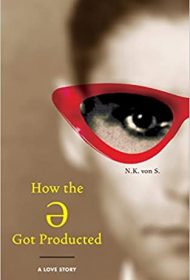 The novel How the Ə Got Producted is written in the salacious style of a political tell-all. It probes intersections of technology and intimacy, subtly interrogates contemporary sexual politics, and offers playful satire of government bureaucracy.

How the Ə Got Producted is an unconventional love story. Its narrator (and author) is N.K. von S., affectionately referred to as “N.–.” Everything traces to N.–’s first, sexually charged encounter with Jeremy Sakhdvar, a lawyer and activist with ambitions to be New York’s attorney general. They met through a personal ad and embarked on a passionate affair that exposed N.– to the world of Washington lobbyists. It imploded when N.– discovered Jeremy’s marriage. But even after the relationship, N.– never really moved on.

Deploying knowledge gained from that relationship, N.– carves out an influential career at Jeremy’s old firm, advising clients as they exploit the loopholes at the Bureau of Biomedicaltechnology (a sort of biotech FDA) to bring their innovations to market. She’s so good that she soon finds herself on loan to the Bureau itself, where she learns of an unapproved, controversial technology that purports to enhance human connectedness (the titular “Ə”), and simultaneously discovers the Bureau houses a radical anti-technology cabal that opposes it.

Now it’s N.–’s job to navigate between a sort of deep-state dissident group and the charismatic entrepreneur behind the Ə as everything leads to a Senate oversight hearing headed by none other than Jeremy, now a star senator and rumored presidential candidate.

No plot description can fairly capture all the twists that come next, nor can it fairly convey how much fun this book is. N.– is a wry delight, full of guile, wit, and perspicacity, and the author has an effective ear for dialogue and talent for rendering the more prurient elements in a tastefully entertaining manner. The story is hard to follow initially, but readers are amply rewarded for perseverance, and the ending is both surprising and satisfying.