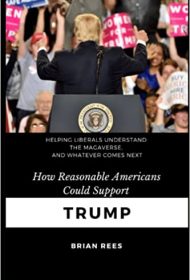 In our politically polarized society, Brian Rees undertakes an ambitious effort in his book How Americans Could Support Trump: Helping liberals understand the MAGAverse and whatever comes next.

Rees is an MD with two master’s degrees, retired after 38 years in the Army. He’s a registered Independent but favors the Republican party. Yet he disagrees deeply with today’s GOP, stating that it demonstrates “cowardice, cynicism and delusion.” He believes extensive reform of the party could improve our government, and perhaps even save our democracy.

In the book’s first section, the author takes a deep dive into the sociology of how we adopt our political beliefs. In the second part, he reviews Trump campaign promises he believes “reasonable” people could support, such as “draining the swamp,” lowering taxes, and appointing conservative judges. Lastly, he discusses the GOP’s problems and offers his solutions to “bring it to its knees” so that it can be reborn to have a “positive effect on American life,” rather than its current destructive impact; his ideas include adding more justices to the Supreme Court and eliminating the filibuster and Electoral College.

Interestingly, Rees addresses liberals because he believes they demonstrate “relative openness… to new information,” whereas conservatives “tend to be content with what they already know — an irony he acknowledges. He clearly abhors Trump, writing that we’ve never had a president “so apparently willing to acquiesce to his malign desires.” Yet while the author wants to separate Trump’s political agenda from his character, the two are inextricably linked. Without even minimal efforts to address Trump’s offensive and perhaps even criminal actions, Rees is unlikely to help liberals make sense of the “MAGAverse.”

Readers should also note that while this book is well written and extensively researched, it can be dense, with complicated details about taxation, gerrymandering, etc.

Ultimately, Rees makes a valiant effort toward his goal. While he falls short, his work is intelligent and might provoke readers into expanding their political comfort zones.