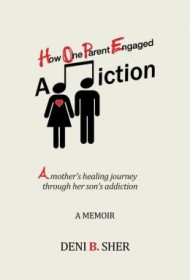 One of the biggest challenges of parenthood is knowing when to let go of your child. But what do you do when the child is hellbent on self-destruction? Such is the story of Deni B. Sher, whose son Ryan battled alcoholism and drug addiction starting in his teen years.

Early on, Sher was in denial. Later, when she wasn’t throwing money at the problem, she was threatening her son or thinking that she could fix him through the sheer force of love.

That passion makes How One Parent Engaged Addiction a compelling read. Her deeply sincere story is equally heartbreaking and uplifting, chronicling mother and son’s decade-long struggle as they attempt to wrest control of their lives and the disease of addiction. And it is a disease, not a failing, Sher believes; “No one recovered person chose to be an addict or alcoholic,” she writes.

Unfortunately, her fervor also bogs down the memoir. Sher feels compelled to share every poem, song, letter and email (sometimes twice) she wrote while dealing with her son’s addiction, so readers may find themselves skipping through large chunks of copy to get back to the narrative arc. Additionally, Sher originally intended the book as a musical, but “I realized a book would be a more logical vehicle for telling my story,” she writes. Removing some poems and songs and remnants of the book’s musical past would make the story more cohesive and tightly knit.

Detachment is part of recovery, so Sher would have better served the reader if she had been more objective in her writing. She continues to blame herself for encouraging Ryan’s marriage, for example, which failed after a year, even though she wasn’t responsible for that – or for his addiction. A more impartial approach could have reached the audience that needs help the most: those who are still in denial. Even so, there is much here that will appeal to those in similar situations.