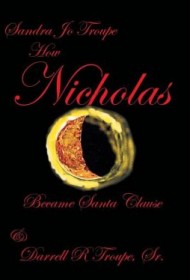 Did you ever wonder who Santa Claus really was, where he came from, and how he came to possess magic, immortality, and that big, all-knowing heart? Sandra Jo Troupe and Darrell R Troupe Sr., coauthors of How Nicholas Became Santa Clause, offer an answer in this novel that imagines a fantastical realm.

In this book, readers enter a world where humans, wizards, dragons and “Oddlings”— human-like creatures such as trolls, elves and fairies — exist in a cosmic web of life, called the “Linking.” Good and evil exist, yet until the dawning of young Nicholas’s life, good has been in the forefront. But signs appear in the Kingdom of the Auroras that King Richard Dobromil’s jealous second son is tipping the balance toward evil and will stop at nothing to obtain absolute power.

At the heart of the growing threat is a prophecy about a young man whose destiny it is to restore the balance. Nicholas, a simple farm boy, is forever marked by this prophecy and must grow into the hero who can restore balance to the Linking or lose it all. A risk-all love story interwoven with his fate adds to this tense, satisfying journey.

Two issues weigh down the storytelling here. The authors seem enamored with certain words — especially “glimpsed” and “simpered — which distract readers from the story. And descriptive scene-setting vignettes are often longwinded when fewer words and crisper detail would better propel the story forward.

Still, the Troupes have created an original, deeply appealing fantasy world that explains how Nicholas, a boy from two worlds — the ordinary and the magical — came into being as a deeper character in our psyches. It’s such a magical tale that one wonders if a more riveting, magical title would serve the book better, such as The Linking, or Nicholas and the Kingdom of the Auroras.

BlueInk Heads Up: The depth of the mythic and magical realm that the Troupes have created here echoes the themes of non-fiction classics such as Joseph Campbell’s Hero with a Thousand Faces and Tony van Renterghem’s When Santa Was A Shaman.