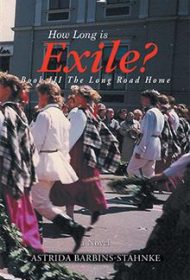 How Long Is Exile?: The Long Road Home is the third in a trilogy that examines the singular feeling of dislocation that is exile.

The story opens in 1983 with Latvian widow Milda Arajs recalling acting in a play performed in a displaced persons camp in Germany after WWII. It then quickly turns into a novel within the novel in which Mara, a young woman born of exiled parents, flies to Latvia in the 1980s in search of her heritage, discovers the bleak nature of Soviet occupation, and falls in love. Then it’s back to Milda, the main protagonist, who remarries, this time to a domineering fellow expatriate consumed by guilt over a war crime he committed and determined to have his own way.

Although these two storylines are somewhat intertwined (especially when Milda herself later returns to Latvia), the flow, particularly early on, is too often disturbed by a confusion of time and place and of people who swim in and out of focus at odd times and to uncertain purpose.

While inarguably disorienting and frustrating, this uneven structure serves the central theme. Since the recurring motif is of a country lost, then found, and then (for some) lost again when grim modern reality clashes with idealized memories, the occasional structural chaos parallels the emotional roller coaster many are forced to ride.

The present volume would be enhanced by familiarity with its predecessors. Still, it can stand alone in its tempestuous account of modern Latvia interwoven with the retelling of a Baltic folktale about the rescue of a princess from a glass mountain that serves as a recurring metaphor for the Latvian people’s salvation from the yoke of occupation. Most important is the theme of adapting to a new environment while forever longing for the old.

Certainly, the novel’s structural weaknesses can make the story hard to follow in places. But for those who persevere, the novel’s central message will be both clear and indelible.