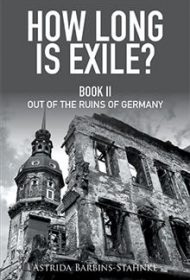 The first novel in Astrida Barbins-Stahnke’s autobiographically inspired trilogy, The Song and Dance Festival of Free Latvians, saw Milda Arājs attempting to keep her heritage alive in the American Midwest. In this second book, Out of the Ruins of Germany, Milda delves into the past to tell her children stories from 1944–50, which she describes as a “separate, colossal era ruled entirely by the forces of war.”

Milda is 13 in 1944 when she and her aunt, Alma Kaija, flee their Red Army-surrounded town in Latvia and arrive in Germany as refugees. Milda learns German at school and becomes close friends with Gisela Niert. In 1946, Alma and Milda move on to an all-Latvian displaced persons camp in Esslingen, and in 1950 they part ways: Milda joins her fiancé, Kārlis, in America, while Alma emigrates to Sweden.

The inclusion of passages from Milda’s journal and letters from her sister Zelda create an effective contrast between the protagonist’s interior life and wider history. Moreover, the survivor’s guilt Milda experiences over her parents’ predicament—her father dies in Siberia years after being deported and her mother is in an asylum—is poignant.

Alma, a flamboyant actress, is the most compelling character; compared to her, Milda can seem dull. Yet the novel is enlivened by details of cultural activities, such as performing in a school Christmas play or baking braided saffron bread for Easter. Descriptions of feasts are particularly enticing.

Rather than numbered chapters, the book is divided into sections with subtitles in bold; readers will long for the natural eye breaks that chapters bring. Also, the focus on the same holidays each year makes the narrative seem repetitious in places. An incest scene comes as if out of nowhere, and there is occasional awkward phrasing, e.g. “talking in the Latvian.”

Nevertheless, this is a sweeping and unusual story of refugee life around the time of World War II that many will appreciate.