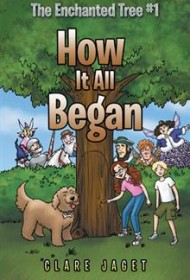 Clare Jaget introduces a world of faeries, mythical creatures, and magic in the first of her Enchanted Tree chapter book series, How It All Began.

Cousins Emily and Thomas are spending the summer holidays together at Thomas’s family home. After a storm, the children discover that an enormous oak tree has been toppled in the backyard. Taking their dog, Henry, with them, they go to explore the damaged tree.

Noticing the hole where the tree’s roots once stood, Henry bolts down it, and when the children follow him, they discover an underground world filled with faeries, leprechauns, and other magical beings. They interact with their new friends, offering support to an upset fairy queen named Mab. Henry helps a leprechaun find his lost pot of gold, and he and two children are each rewarded with a wish. Their wishes pave the way for the continuing series.

Jaget’s chapter book promises magic and adventure, but it falls short of this goal. The book, unfortunately, features uninspired characters and a lackluster storyline. The only significant action in the book involves the dog, Henry, who discovers the magical stairwell to the faerie kingdom and later takes initiative to find the lost gold. Emily and Thomas do little more than observe details about and talk to the various beings they meet.

The writing includes many technical and narrative errors. There are many typos, which are especially distracting considering the length of the book, and the chapters end at arbitrary moments that disrupt the story’s flow. Although the black and white illustrations by Susan Shorter are attractive and the glossary provides interesting information about the mythical creatures and the legends mentioned, these elements fail to salvage the story. One hopes for a more polished showing in the next installments of the Enchanted Tree series.