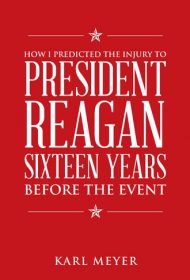 Society has made significant strides recently in understanding the challenges of those with non-binary sexual identity. Into this evolving sensibility, Karl Meyer offers this disturbing tale.

The title is only tangentially connected to the core story, told in first-person, about Meyer, who, growing up in the 1960’s, feels trapped in society’s rigid gender roles. He chafes against the expectations of others, especially male authority figures disdainful of his performing arts ambitions. He’s also angry he must remain in school or be subject to the Vietnam War draft.

In short, he wishes he were a girl. “They were hugged and kissed by my father,” he writes of his sisters. “I received a handshake.” His turmoil, along with that of a male classmate with similar longing, leads to his friend’s act of self-mutilation—which he somewhat encouraged.
It’s unclear if Meyer’s story is completely factual or if it has been embellished as allegory. The connection between his childhood frustrations and the later assassination attempt against President Reagan is a stretch. He writes a letter to President Johnson as a boy, noting—with convoluted and confusing logic—that if “I failed to make a professional debut as an actor or a singer” by certain timetables, something bad would happen to “the foremost representative of the government at that time.” He contends that the 1981 shooting was proof his prophecy came true.

For a topic so intimate, there’s an odd sense of emotional detachment throughout. Meyer catalogs the many ways in which he has been wronged and misunderstood, but he also enjoys privilege. He’s admitted to Harvard, after which he orchestrates a series of scams and drug-fueled misdeeds, feeling little remorse. Such behavior isn’t unusual in someone with psychic scars, but without more introspection, it’s off-putting to readers.

More context is needed to connect the dots and create an interesting case study of the complexities of gender identity. Unfortunately, as written, the story feels superficial and ultimately incomplete.