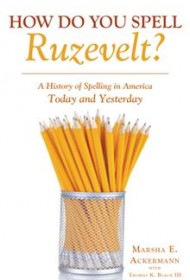 If you’ve ever wondered about the differences between English and American ways of spelling, this perky little book has all the answers. And although a history of spelling might seem a dull, dry subject, Marsha Ackermann has the writing chops, sharp intelligence and wry good humor to make this book a delight.

Ackermann is a self-described “spelling stickler,” who writes from personal experience having been a finalist in the 1963 Scripps National Spelling Bee. She notes that English words such as “harbour” and “labour” have dropped the silent “u” this side of the Atlantic; similarly words such as “programme” and “catalogue” have been phonetically Americanized into “program” and “catalog.” Although we commonly use many such adapted spellings, this book shows that thousands more could be circulating if ardent reformists had had their way.

In the late 18th century, as America began forging its unique national identity, spelling reform was a hot-button issue, inciting fanatical support and opposition. The debate divided along social, racial, religious, political and even patriotic lines: Should newly independent America carve out is own linguistic future? Or was traditional English too rich a heritage to abandon?

Ackermann trips lightly back and forth across two centuries following this debate, which, while less heated, still simmers today. Prominent figures such as George Bernard Shaw, Mark Twain, Andrew Carnegie, Benjamin Franklin and President Theodore Roosevelt all waded into the argument. Franklin even proposed replacing c, j, q, u, w and y from the alphabet with six new characters better representing actual sounds.

This intriguing story extends from Noah Webster’s Blue-Back Speller — first published in 1783 and the genesis of his enduring dictionaries — through to today’s tweets, texts and spell-checks. Ackermann also stresses the value of spelling skills, countering modern arguments that they no longer matter in the computer age.

Teachers and parents will especially enjoy this erudite yet entertaining narrative, while all readers will be richly rewarded by Ackermann’s insights into American social history.