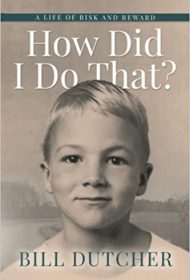 In this candid memoir, 78-year-old businessman and NBA wannabe Bill Dutcher thoughtfully ruminates about the ups and downs of his life.

Dutcher takes readers from an adventurous childhood in Bartlesville, Oklahoma, where he led a neighborhood “Little Rascals” gang, to his high school dreams of becoming the first white Globetrotter, the acclaimed basketball players known for their antics and top-notch court skills. In college, he earned a degree in journalism, followed by a four-year Navy stint.

Dutcher’s conversational writing style moves events forward to reveal a driven civilian life where he worked as a reporter, PR executive, speechwriter, and Washington lobbyist. Ultimately, he established his own oil and gas company. Woven throughout his story are details of his marriage, family and ever-present love of basketball.

While these moments are interesting, more often the book is weighed down with dense details of games played in high school and later years, making for tedious reading. Also, sudden topic changes from business to family or basketball disrupts continuity, and some minor proofreading is needed. Humorous moments help lighten the proceedings, however, such as when, as a youngster, Dutcher ate the apples off a neighbor’s prized fruit tree, then replaced them with the cores.

The book’s epilogue offers Dutcher’s suggestions for winning at the game of life, including learning as much as possible and considering coaches as great teachers and mentors. He stresses the importance of a well-rounded life and notes integrity as the key to happiness.

Overall, the story lacks the narrative flair and novelistic arc of memoirs embraced by general readers. Still, it might hold some appeal for basketball enthusiasts and those interested in business pursuits.