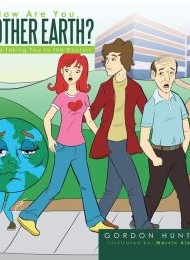 In How Are You, Mother Earth? We’re Taking You to the Doctor! Gordon Hunter has placed a scientific analysis of the Earth in the setting of a doctor’s examination.

Mother Earth, guided by three concerned humans, is examined by doctors and specialists who estimate the Earth’s age and weight, respiration, temperature, and even check its pressure (explaining both blood pressure, and the purpose of a barometer, in the process). There are reams of information here, and Hunter errs toward the side of providing too much, rather than too little. Here, for example, one of Hunter’s characters discusses the legacy of the Keeling Curve, a measure of carbon dixoide in the air:

“Dr. Charles David Keeling began recording the concentration of carbon dioxide in the Earth’s atmosphere in 1958 at the Mauna Loa Observatory in Hawaii. The importance of that record is verified by its continuation in spite of Dr. Keeling’s death in 2005.”

While the metaphor of a thorough medical examination of the Earth is well-suited to children, some of this language may prove too great a hurdle for younger readers. Hunter seems happy to split his potential audience; precocious readers and young scientists who’ve had enough of the “basics” will enjoy detailed explanations they’d be hard-pressed to find elsewhere, but neophytes could have trouble with the text’s density.

Hunter can be wordy at times, and his use of puns for the names of doctors and scientists sometimes falls flat, as Mother Earth is examined by Dr. Ec Sam, Dr. Eppee Durmas, and Dr. Fyrtle Soyl. But again, some young readers might find that these bits of levity break up all of the science-speak nicely. The illustrations and graphics are excellent, with detailed charts and graphs, in addition to cartoon pictures of the characters themselves.

Overall, How Are You, Mother Earth? provides a rewarding science read for those children who can appreciate the challenge it presents.