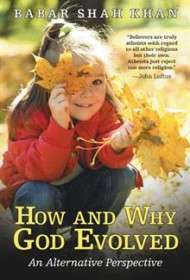 In How and Why God Evolved, Babar Shah Khan takes a comparative look at religion in an effort to demonstrate “the link among pagan, polytheistic, and monotheistic beliefs.” Focusing primarily on Judaism, Christianity and Islam—with some side excursions into Buddhism and Hinduism—this work of armchair history and sociology explores such topics as ritual and dogma, miracles and magic, prophets and angels, and their interdependent relationship between faiths.

Looking to pull off the veil of the sacred (and what believers may think is a uniqueness of their particular belief system), Khan attempts to show how signs, symbols, and stories from Greco-Roman, Hindu and Chinese mythology were adapted into the Abrahamic religions. Along the way, he points out contradictions that run rampant throughout religion as a whole; for example, the “bitter irony that Jews, Christians, and Muslims…are ready to kill one another without considering their common God.”

The author, critical of blind faith, points out that while many believe we are made in God’s image, it’s more likely God is made in our image and contains the same quirks and deficiencies as we ourselves do. Case in point, the Old Testament God who preaches loyalty and covenant, but then sends “down blazing fires that kill innocent people.”

Khan is an astute observer of hypocrisy in religion. His prose is casual and informal (e.g., “God also gave Jesus (who was His kid, after all) the power of making miracles.”). Many chapters, however, feel incomplete. Khan raises interesting questions, but falls short of drawing concrete conclusions; in the chapter on angels, for example, he asks why angels were so prevalent in ancient times but not today. Before he can fully explore the issue, the narrative veers in another direction, leaving readers hanging.

Overall, How and Why God Evolved is a mixed effort. Khan skillfully exposes the contradictory nature of belief, but needs to draw more satisfying conclusions for the book to reach its fullest potential.