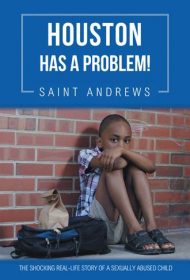 Saint Andrews tells the story of his troubled life in his memoir, Houston Has a Problem!

Born in the ‘60s, Andrews’s story begins with intense memories of his first molestation at age four by a teenage babysitter. From there, he discusses other disturbing events, including watching neighbor brothers have sex with their sister; a summer spent with his abusive grandmother, who beat him with a tree limb after suspecting promiscuity between Andrews and his cousins; incessant bullying at school, and more.

As he aged, he continued sexual experimentation as a gay adolescent. At that time, homosexuality was taboo. Thus, he sought love and sex in harmful places, such with strangers at bars. By high school, he writes that he was “addicted to anonymous sex with strangers.”

Andrews’s adulthood was fraught with other troubled encounters and spiraling drug use. Every step forward seemed to bring a setback. The story eventually builds to a climax when the author ingests sleeping pills in a failed suicide attempt. Finally realizing his own self-worth, he seems headed for a successful music career –“but my problems were just beginning…” he writes, vowing to tell the continuing story “in my next book.”

Andrews’s memoir is eye-opening, from impossibly cruel relatives, to a “Jekyll and Hyde” partner who abused him for years, to an unsubstantiated arrest for male prostitution. He writes in a straightforward, conversational style that feels authentic and candid.

His story lacks, however, the artful flair that allows his pain to resonate. Often, he tells readers he was scared or angry but rarely goes deeper. This is understandable, as his memories are traumatic and surely difficult to process, but it robs the story of keen insights and knock-out emotional punches. More depth of thought would improve the book, as would a solid conclusion.

Nonetheless, Andrews’s story is worth reading for its raw, revealing look at a man reeling from a traumatic start in life, yet fighting valiantly to land somewhere safe.