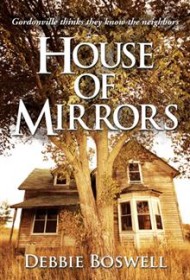 Family, identity, appearance and reality are on a collision course in this riveting thriller, House of Mirrors.

Jenna Crandall is odd-girl-out in her eccentric family. Sisters Lauren and Diane have bullied her mercilessly, and her mother, Bella, enjoys the limelight for her philanthropy while viciously abusing Jenna in private. What’s going on here? And who is Jenna’s dangerous childhood friend Rosa?

Author Debbie Boswell has filled this novel with a rich cast of racially diverse characters, each of whom has at least one skeleton in the closet. Family gatherings are fraught with tension, and some of the showdowns between Rosa and her victims are chilling. After the book’s big secret comes out, however, the behavior of law enforcement is wildly unbelievable, and energy drags for the last 100 pages.

This House is also flawed by numerous grammar and punctuation errors — quotation marks sometimes seem like an afterthought, appearing and disappearing with no regard to speech — which can make for rough going.

That said, readers will happily stay up all night to find out who done it.
The story is utterly gripping in spite of its flaws.

Boswell has the skill to write a blockbuster novel. Her characters are distinct and vivid; short chapters move the action along quickly, and despite her travails, Jenna finds time for a romance and some moral lessons in the midst of the world’s most dysfunctional family. House of Mirrors needs a tune-up to correct the problems mentioned, but many thriller fans will consider it a ride worth taking regardless.