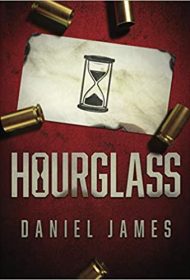 Daniel James takes the ghost story to a new level in his compelling novel Hourglass.

The book’s Prologue introduces Konstantin Kozlov, a Russian monk who has long been kept in a Siberian prison and is now being flown somewhere in a private jet. Like bees in a hive, a group of dead soldiers inhabit Kozlov’s body. All play significant roles in the coming story.

Chapter One introduces fledgling comic book artist Clyde Williams and his best friend Kevin (“Kev”) Carpenter. Kev, an innocent bystander shot in a liquor store hold-up, is actually dead. Although a ghost, attached somehow to Clyde, he acts like his old self— except for the hole in his chest and his special powers, such as telekinesis and the ability to walk through walls.

The U.S. government wants to recruit Clyde and Kev into a black ops outfit called “Hourglass.” The outfit plans to go into Erebus, a hell-scape filled with fire, monsters and other dangers, where almost all souls end up after death, regardless of their previous lives.

This plot alternates with chapters about Kozlov. Because souls are comprised of energy, a wealthy conglomerate wants to sell them. It has paid Russia handsomely for Kozlov’s release, as he knows how to get into Erebus. But Kozlov has his own plan: to find the “Firmament Needle,” which will open a gateway to a nicer place, so that his ghosts and other souls can spend eternity in peace.

Hourglass is an unusual ghost story with a unique, well-conceived fantasy land rivaling anything from Dante. Unlikely alliances between warring factions bring surprises, and Clyde and Kev’s relationship prompts an interesting question: Would you be willing to die for your friend, even if he were already dead?

The Kozlov chapters are sometimes confusing (what are his real purposes and allegiances?), and the frequent battles can feel redundant. Nonetheless, Hourglass is original, thought-provoking and engrossing. The Epilogue sets up a sequel, which readers will happily anticipate.