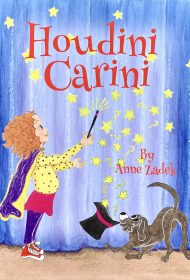 The young progeny of magician parents learns that patience is a virtue in the entertaining children’s picture book Houdini Carini.

After watching her parents perform their magic act on stage many times, Houdini Carini expresses interest in becoming a magician, too. For her birthday, her parents give her a humorously enormous book with the equally gigantic name Complete Encyclopedia of Amazing and Astounding Magic Tricks You Can Learn in a Lifetime.

Houdini doesn’t want to read such a huge book and figures she’s seen magic her whole life—how hard could it be? Her attempts at performing several advanced tricks fall flat, however, and when her parents offer to show her an easier trick, Houdini claims she “only does AMAZING magic, not easy baby tricks.” After another disastrous attempt, Houdini finally accepts her parents’ challenge to learn the very first trick in the book, and after much practice, she performs it successfully before an appreciative audience.

Summarized in Houdini Carini’s final words, the book’s lesson is a valuable one: “Begin at the beginning. Start small. Practice makes perfect.” Anne Zadek clearly understands children, who will relate to Houdini’s eagerness to skip the difficult parts of a task for more immediate gratification. Her writing is kid-level and effective, particularly the technique of splitting sentences across pages, which helps sustain momentum.

Zadek’s writing isn’t perfect, however, with some missing or misplaced punctuation; similarly, her hand-drawn and hand-colored artwork is appealing but occasionally awkward, as when she shows Houdini’s feet in an impossible position. Still, the book’s enjoyable, organic quality stems from Zadek’s illustrations, so a few missteps are easily overlooked. Zadek also explains a simple card trick at book’s end, using clear instructional drawings and text—a nice touch to a story that might inspire kids to learn magic themselves.

In sum, Houdini Carini imparts lessons crucial to success in any venture, and does it in a way that young readers will find natural and fun.