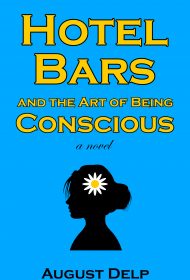 In this smartly told novel, a mother facing an empty nest sets out in a quest for new experiences as she ponders life’s universal questions.

Daisy’s story begins when she takes her only son, Tom, 16, to enroll in an elite private school outside Luzerne. Daisy, 45, never married Tom’s father, Glenn, a business colleague, but the two have an agreement that has helped make Daisy a wealthy woman. Glenn lives near the school in Zurich, so Daisy, based in Seattle, knows Tom is in good hands. But now she faces “the penultimate rite of passage, with only retirement remaining. Well, death, but that’s just an end.”

In the past, Daisy worked as an accountant. Now she’s relatively free of obligations and finds herself pondering the meaning of life. Believing it will provide an interesting experience, she becomes a bartender in an upscale hotel bar. There, she befriends an advertising exec and begins surveying her patrons about their thoughts on life.

She also travels and eventually reconnects with her old college roommate, Bianca, now a neuroscientist and global speaker. As Bianca becomes mired in a complex scheme involving human behavior, Daisy sets off for the Pacific Crest Trail, seeking the answers to some of the questions she’s been considering.

The storyline involving Bianca and her work is interesting and informative but can also lend the characters in her circle a certain off-putting snootiness. But overall, the characters are intelligent, energetic and likeable.

The story is well-plotted and colored with entertaining detail, particularly relating to the Pacific Northwest setting, the brain’s intricacies and even, bartending. In her quest to land the job, for example, Daisy wonders how juniper-berried gin made it into the “pantheon of liquors,” and calls brandy the “sexy stepchild.” Despite Daisy’s philosophical musings, the story never feels overly weighty, largely because her curiosity, never dark, is so genuine.

For those who enjoy an intelligent escape, Hotel Bars provides a thought-provoking and entertaining read.