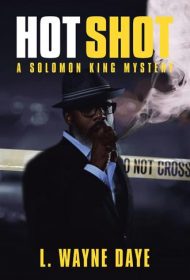 In this mystery, a police detective contemplates how people lose their humanity, all in the name of power and money.

Solomon King is a cigar-chomping detective with the Durham, North Carolina police department. He’s known throughout the department as a renegade cop who refuses to follow the rules and has no use for the police brass. He’s also widely considered the best detective on the force.

When a series of drug users and dealers begin dying from “hot shots” – high grade heroin that’s deadly on contact – King is tasked with solving the crime. Paired with Detective Linda Graves, King is unsure how he feels about having a new partner, and as Linda chases after her own case, involving catching a serial rapist, the verdict on their relationship (could it lead to romance?) is still out—for the moment. King, a widower with two grown children, also has a romantic eye on the sister of one of the victims.

The book touches on some current issues, including public skepticism of the police and racial injustice. The author also has a solid sense of place; clearly, he knows Durham well. Although readers might take issue with a rather mundane conclusion to the secondary plot about the rapist case, Solomon King is a solid character that readers would want to get to know further.

Unfortunately, for all its promise, the book feels like a rough draft, with numerous misspellings, punctuation errors, even point-of-view issues; i.e., “Solomon finished making some notes at the office, trying to put the Professor out of my mind.” Or, “That was too much of a coincident for him.” A few mistakes might be acceptable, but the text is replete with errors that make reading challenging.

That’s too bad because Daye has the building blocks for a compelling book. With revision with an eye toward writing mechanics, the book could have widespread appeal.