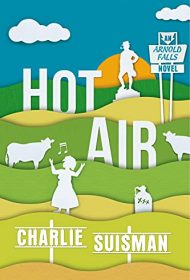 Hot Air, the sequel to Charlie Suisman’s excellent Arnold Falls, furthers the adventures of the eccentric residents of his fictional town.

Protagonist (and part-time narrator) Jeebie is now happily dating Will, but is preoccupied with finding purpose. After a quasi-spiritual encounter with a cow named Minna, he offers to help found an animal sanctuary, and after an encounter with children in a cancer ward, he uncovers corruption at the local hospital.

Meanwhile Jenny, the new mayor, is trying to strike a balance between development and conservation when a rash of strange thefts breaks out across town. And things get weirder when the town becomes a film location for Merryvale, the popular series based on a fictional version of Arnold Falls itself.

Suisman’s smart, snappy dialogue remains on point, and every character retains their easy likability as the story reprises Arnold Falls’ trademark cozy comedy/lightweight mystery format. Hot Air, however, doesn’t benefit from the multitude of “will they or won’t they?” romantic escapades, delivering just one romantic subplot.

There’s a principle of diminishing returns at work, with Hot Air losing a smidgen of the original magic. Arnold Falls remains a welcoming place to escape to, but the events feel a little too contrived this time and the story a little slow to take shape.

If Hot Air falters, however, it’s partly because it begs comparison to its over-performing forbear. Judged on its own merits, it’s still a fun excursion, and whether it’s a reader’s first trip to Arnold Falls or second, they’ll likely treasure the visit.