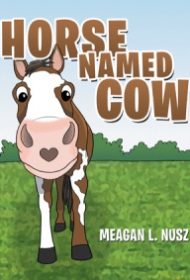 Meagan L. Nusz tells the simple tale of a horse who is accepted by his peers despite his differences in the picture book Horse Named Cow.

Cow, a mostly brown horse with a cow-like spotted pattern, thinks he’s the same as everyone else, but his fellow horses feel otherwise. While Cow plays with his best friend, a dog named Vito, the other horses ignore him, or are scared by him. Cow’s confidence begins to falter, until one of the show horses falls in the mud and acquires his own temporary “spotting.” The horses then realize that it’s what’s on the inside that counts, whatever a horse might look like.

Inspired by Nusz’s real-life horse Max (nicknamed “Cow”), Horse Named Cow is a pleasant story, written in plain language easily absorbed by children. Cow is living a good life until he doubts himself, and when the realization is made that “it’s not how you look on the outside that defines who you are,” Cow learns the lesson as much as the other horses.

The book has one point of confusion/inconsistency: Cow’s stablemates first ignore him, but a couple of pages later they’re spooked by the sight of him, and then on the following page, the same horses are laughing and making fun of him. These disparate reactions create a sense of discontinuity. Additionally, the moment when the horses come to accept Cow appears too suddenly to seem authentic.

In a book about appearances, illustrations carry much of the weight of the storytelling, and here, the images are appropriate and effective.  Children will also enjoy the photographs of the real-life Cow at the end of the book.

This type of story has been told many times, and there’s nothing in Horse Named Cow that breaks new ground. Still, it’s a way to introduce very young children to important concepts like empathy and discrimination, done in a manner that boils it down to the essentials.