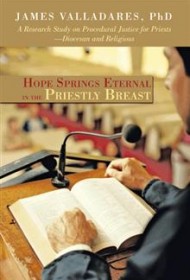 For the last two decades the Catholic Church has been mired in child sexual abuse lawsuits and criminal cases. In response to public outcry over the Church’s apparent cover-up regarding offending clergy, the United States Conference of Catholic Bishops promulgated guidelines to create a “safe environment within the Church for children and youth.”

In Hope Springs Eternal in the Priestly Breast, James Valladares argues that the guidelines are reactionary and that the subsequent actions some bishops have taken toward accused priests are too severe. Many priests, he contends, are being unfairly deprived of their reputations, ministries, and livelihood.

While he acknowledges that some sexual abuse charges are legitimate, Valladares feels that most are motivated by spite and greed. Consequently, Valladares argues for a revamping of the procedures that bishops follow toward accused priests, which would place emphasis on the bishop’s Christian role as the priest’s father and brother and would allow offenders a chance to repent and reform, and be “allowed suitable time to do so.”

Throughout his book, Valladares focuses unswervingly on the priest as a “precious gift…to God’s people” and, as such, fails to present the child’s side or consider the legal consequences of his ideas. For instance, Valladares states that bishops should keep their priests’ confessions regarding sexual child abuse confidential. Most states, however, require mandatory reporting of child abuse; a bishop who did not report could spend time in jail. Additionally, Valladares’ fails to adequately attribute many of his anecdotes and assertions. For instance, he states: “a California lawyer’s study shows that up to half the claims against Catholic priests are false.” Which lawyer? What study?

To engage thoughtful readers, better editing and a more considered weighing of the responsibilities of employers and the rights of accused priests versus those of children is necessary.