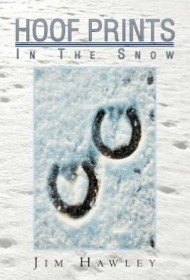 The ranches, horses, extreme weather and formidable peaks of a still wild West form the setting for Hoof Prints in the Snow, a novel about a rugged Wyoming individualist.

Lucy Johannson Morgan, a rancher’s daughter born in the 1920s, marries a refugee from the Dust Bowl named Charlie. The tale traces the couple’s lives through Charlie’s service in World War II and the early Cold War and Vietnam eras, to the present day. We see Lucy as an insouciant teen, an eager young wife, a mother of two children — neither of whom has an easy life — and a sickly older woman who harbors a terrible secret.

The current nostalgia of Baby Boomers and Gen X-ers for the mid-20thcentury world of their or their parents’ childhoods forms a context for the book. (Ken Burns’ film The War and the television series Mad Men are two examples of this mid-century mania.) Although Jim Hawley’s book is set in ranch country rather than Madison Avenue, it will be welcome to readers who maintain an interest in all things 20th century.

Hawley’s writing is engaging and well-paced, with an eye for detail. His depictions of combat in WWII and Vietnam have the ring of authenticity. More driven by plot than character, the Morgans’ story especially engages the reader in the chapters that alternate between Charlie’s WWII exploits and Lucy’s misadventures on the home front. One startling anachronism, however, is that Hawley addresses women as “Ms.” in the 1930s and 1940s, decades before the feminist movement established that title.

Hoof Prints is a charming, well-constructed though not profound work. Lovers of things retro, enthusiasts for the Mountain West or readers just seeking a solid yarn might have a look.