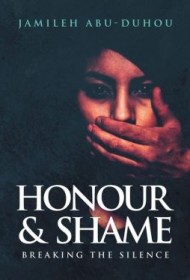 Author Jamileh Abu-Duhou notes that her novel is based on “a collection of voices of Palestinian women.” It is a shocking, harrowing tale of spousal abuse and official indifference, set in Palestine.

Forced by family into a disastrous marriage, heroine Lena endures eight years of broken bones and ruptured organs at the hands of her brutish husband, a petroleum engineer named Sami, and equal doses of intimidation by his dictatorial mother.

Just as appalling, Lena gets ensnared by a male-centric justice system that stacks the deck against women—Christians like Lena, as well as Muslims–and tacitly sanctions the “honor killings” of supposedly wayward wives. “You deserve to be treated like an animal,” an infuriated Sami screams at his quaking wife before slamming her head into a wall. Little matter that the real problem in their marriage is Sami’s impotence.

A medical anthropologist and women’s rights activist, Abu-Duhou is, like her heroine, a native Palestinian who has lived in Australia. She infuses the book with passionate intensity but, unfortunately, falls down in other areas: Her narrative is shapeless and, in many places, hard to believe. For example, Lena’s loving father is so susceptible to lies “explaining” his daughter’s ever-more-gruesome injuries that you want to slap him upside the head with common sense. And while the heroine acknowledges that she’s “complacent in my own victimization,” it takes far too many pages for this passive, compliant creature to finally speak out.

Abu-Duhou also has problems with English: For instance, Lena tells us she and another woman “went to have our hairs done,” and the writer tarnishes a crucial scene by referring to Lena’s vagina as a “Virginia.”

Nonetheless, the story’s intensity is compelling. At its best moments, this exposé of the grotesque sexual politics and violent misogyny rampant in Arabic cultures feels like a sting to the conscience and a punch in the guts.